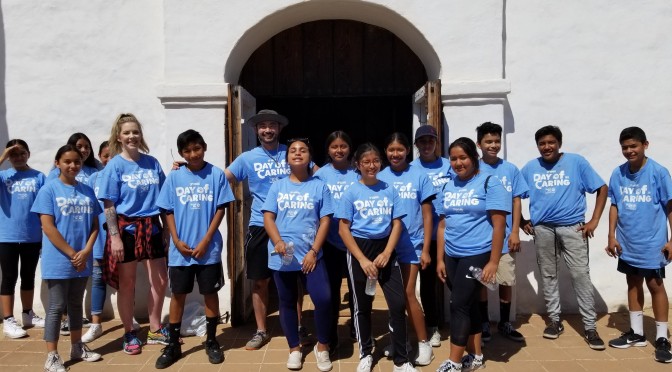 Anne directed a group of volunteers that took on the daunting task of cleaning and organizing of the Old Research Center library space. Chris oversaw the cleanup of the Presidio Research Center landscaping. Trees and shrubs were pruned all the way around the building to provide space for the HVAC equipment and to expose existing signage. I worked with a group of volunteers from Exxon/Mobil to complete the annual maintenance of our garden areas. Volunteers weeded, tilled, hauled mulch, pruned, and planted in the Presidio Heritage Gardens at the Northwest and Northeast Corners.

Thanks to the help of the generous United Way Day of Caring volunteers, SBTHP was able to accomplish critical maintenance projects to prepare the site for winter. We look forward to continuing this successful partnership between SBTHP and the United Way Santa Barbara volunteer community again next year. 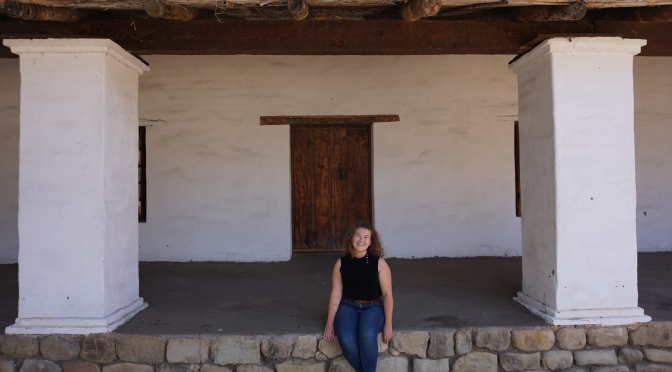 Emma John is a second-year PhD student in History at UC Santa Barbara interested in public history and nineteenth-century U.S. history with a particular focus on women.  As an IHC Public Humanities Graduate Fellow, John recently completed an internship at the Santa Barbara Trust for Historic Preservation, and has been working with the Casa de la Guerra, a historic house museum maintained by the Trust and former residence of José de la Guerra, the fifth comandante of the Presidio.

As a Public Humanities Graduate Fellow you are interning this summer at the Santa Barbara Trust for Historic Preservation (SBTHP). What work are you doing in the internship?

This summer I have tackled a few projects. I started the summer designing new programming activities for Casa de la Guerra. These programs are meant to foster new types of engagement with the space—either moving through it differently or, for school groups, connecting the de la Guerra story to what students are learning about in Social Studies classes. At the moment I am helping design a brochure for Casa de la Guerra. This has involved consultation with museum employees, research, and selecting appropriate images from the Presidio Research Center to best represent the museum and the de la Guerra family. When finished, the brochure will provide a brief but informative introduction to the site.

What has your investigation into the history of the De la Guerra family revealed about the historical and continuing significance of the Casa de la Guerra site for the Santa Barbara community?

Your research is helping to shape new interpretive programming at Casa de la Guerra. What might this programming look like?

There are ongoing discussions about revitalizing De La Guerra Plaza, just opposite Casa de la Guerra. Is your work at SBTHP informing any of those discussions?

I have been considering ways of incorporating Plaza de la Guerra into museum programming. While it is important for museums to consider contemporary issues, it is also important to consider the longevity of programming versus current events. The goal is to incorporate contemporary issues such as talks of revitalizing Plaza de la Guerra while also making sure there are other programming ideas that will be relevant even after town discussions have shifted elsewhere.

Your research interests are in New England house museums; has this internship aligned with some of that work and/or pushed you in new directions?

Again, growing up in the Northeast has led to some, *ahem* strong regional biases.  However, I have been overcoming those biases while learning about Santa Barbara’s history and the history of California in general.  It has been great to get out of my historical comfort zone and imagine how my research interests make sense in California.

What has been the most exciting or rewarding part of the internship so far?

I love learning about local history wherever I am, and this internship has provided an unmatched opportunity to do just that. The trust does so much cool working interpreting and teaching Santa Barbara’s history and I’m thankful to be a small part of it.

How has your work so far in the Public Humanities Graduate Fellows program influenced your understanding of the role of public humanists in their local communities?

We had such a wide variety of guest speakers [in the Skills for the Public Sphere course] and internship opportunities this past spring—things that I had not even considered would fall under the umbrella of public humanities. So I certainly have a greater understanding of what is possible as a public humanist. Additionally, I’ve been learning about the importance of teamwork and collaboration. Historians are really good at solo pursuits such as archival work and writing. We tend to joke about the amount time we spend reading and thinking about dead people (one of my friends once baked a birthday cake for a nineteenth century missionary whose diary she was reading).  However, public humanities requires good relationships with the living.  As someone who is pursuing public history and humanities I’ve appreciated the opportunity to develop those skills of creating history with others.

After we had a brief safety meeting Eduardo gave them an introduction to “Whitewashing 101.” By the end of the day the teachers and students finished whitewashing the interior of the reconstructed western outer defense wall at the Presidio Northwest Corner. A second set of students helped Eduardo whitewash some patched areas of the defense wall at the Northeast Corner. A third group of volunteers helped knock down weeds behind the comandancia, tilled the soil beneath the trees in the Cañedo orchard, and fertilized all the roses around the site.

Thanks for your hard work and we look forward to working with you again next year! Mike Imwalle is the archaeologist at the Santa Barbara Trust for Historic Preservation