On November 9th the Santa Barbara Trust for Historic Preservation (SBTHP) hosted our 3rd Annual Volunteer Olive Picking Day at the Santa Inés Mission Mills property. More than twenty five SBTHP Board, staff, and volunteers picked over 600 pounds of olives for the 2013 crush! Volunteers picked five hundred pounds of Arbequina olivess from the Mill Grove and another hundred and fifty pounds of Mission Olives from the Mission Grove. Park Steward Wayne Sherman organized a delightful lunch followed by a tour of the mills for new visitors to the site.

India Longo and Pamela Sherman displaying the yield from their productive tree. Photo by Anne Petersen.

SBTHP board member Randy Bergstrom with just a portion of his morning haul from the grove. Photo by Anne Petersen.

The professionals go to work on the remaining trees to finish up the harvest. Photo by Wayne Sherman.

After another successful volunteer picking event, a crew of professional pickers were contracted to pick the remainder of the olives. A crew of twelve picked another 2 ½ tons of Lucca, Mission, and Manzanillo olives during two days the following week. Olives were delivered to the miller at Figueroa Farms within hours of being picked. A special thank you goes out to Shawn Addison of Figueroa Farms for lending us picking bins at no cost and milling the olives at a discounted price.

Olives on their way to be crushed. Photo by Wayne Sherman.

The first load of olives heading into the crusher. Photo by Wayne Sherman.

SBTHP olive oil on its way to the bottling facility. Photo by Wayne Sherman.

Despite having to engage in a late-season battle with the Mediterranean Olive Fly, it was a very successful year for the SBTHP olive enterprise. Between the volunteers and the professionals we harvested 6,116 pounds or 3.06 tons of olives netting 122.5 gallons of the oil of the gods. That is a yield of forty gallons of oil per ton of fruit. That is an increase of almost 15 percent over last year’s yield of 35 gallons per ton. Furthermore, we were able to pick almost twice as much fruit in nearly half the time.

On November 25th Wayne delivered 122.5 gallons of virgin olive oil to the Olivos Del Mar packing facility and on the 27th  picked up our first ten cases bottled as “Olio Nuovo” or new oil. Olio Nuovo is the first press of the season. It is bottled unfiltered, immediately after crushing, and has an intense grassy, peppery fresh flavor loaded with polyphenols, making Olio Nuovo the healthiest oil available from each harvest. Produced from a blend of Arbeqina, Grappalo, Lucca, Manzanillo, and Mission olives, this special early release is available for a limited time. Order yours online today or pick some up in the museum shop at El Presidio de Santa Barbara State Historic Park.  For more photos from our volunteer olive picking event, visit our Flickr page here.

Michael Imwalle is the archaeologist at the Santa Barbara Trust for Historic Preservation, and he loves that peppery olio nuovo! 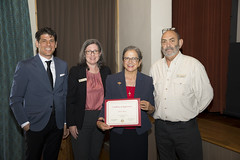 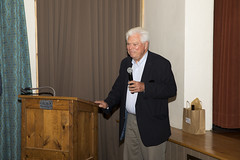 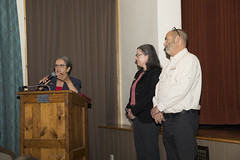