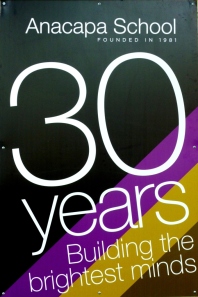 In 1981, Gordon Sichi joined Dr. Robert Everhart and a group of Santa Barbara parents in founding a new independent high school in Santa Barbara to serve students and families who wanted a high-quality college preparatory education in a small school setting. They believed strongly that a small and personalized school would create a learning environment where students would thrive academically, emotionally, and socially. In 1990, the school added grades seven and eight and changed its name from Anacapa High School to The Anacapa School.

Beginning in classrooms at the former Santa Barbara School of the Arts campus within the Alhecama complex, the school moved to its current location in the former Hoff Hospital buildings at 814 Santa Barbara Street in 1984. This year the Anacapa students and faculty have committed to complete 30 community service projects to celebrate the school’s 30th school year. As part of the commitment students have helped assemble the “The Moving Wall” honoring Vietnam War veterans and participated in a litter cleanup effort on the city’s Westside.

The Anacapa School has resided within El Presidio de Santa Bárbara State Historic Park since its founding in 1981. As operators of the park, SBTHP has engaged Anacapa students as living history demonstrators, tour guides, and adobe brick makers. Most recently Anacapa students have participated in internship programs supporting a Smithsonian-sponsored exhibit on presidio-era ceramic production and the development of an interpretive garden.

As part of their commitment to perform 30 service projects during the 2011/12 school year the 9th grade class recently joined Headmaster Gordon Sichi to help SBTHP maintenance supervisor Eduardo Garcia whitewash the adobe walls of the Northeast Corner. SBTHP staff looks forward to working with the Anacapa students and staff on additional projects this year and wish them luck on their next 30 years of educating brilliant young minds instilled with a sense of community service.

Mike Imwalle is the Archaeologist at the Santa Barbara Trust for Historic Preservation and has supervised several generations of interns from Anacapa School.